Creating a collaborative virtual classroom: the case of Discord

In this article I will describe my experience with using Discord, which was initially designed as a communication platform for video gamers, as a virtual classroom to enable highly collaborative team work in a remote context. But first some backstory; I give a yearly Python course for European PhD students organized through the Limperg Institute. This year I was going to give one in June at Tilburg University, however, due to the COVID-19 circumstances that couldn’t take place. Instead, I was asked to provide a virtual course as a substitute. I’ve done my regular spring class over Zoom, but this Limperg course posed an interesting challenge, which is the fact that it heavily relies on collaborative group work. Under normal circumstances we’d all be in a classroom for a week and the participants would work together to solve a wide range of coding problems. Lecture materials and demonstrations can be replaced by recordings, however, how to recreate a highly collaborative environment when everyone is physically separated? This was further complicated by the fact that I am in Seattle, which is an 8 to 10-hour time difference from the participants in Europe and I couldn’t host a Zoom session with break-out rooms while asleep. This is where “Discord” came to the rescue and I wanted to share my experience with it now that the course has concluded.

TLDR; it worked really well and I encourage you to check it out if you need to recreate a collaborative team environment in a virtual context!

Discord is a free voice and text chat application. It works based on a Discord server (think of it like a community with members) and chat / voice channels (think of it like separate rooms to talk to each other). It was primarily designed as a communication tool for people that are playing video games together over the internet. This doesn’t sound particularly relevant for online teaching at first glance, however, playing competitive video games online relies heavily on reliable communication and team work and Discord is designed to facilitate that. Furthermore, many gaming groups have used Discord to develop their own little communities for resource sharing and collaboration in between playing games. This is where I realized that it might actual be a great tool to recreate a collaborative classroom environment, the Discord server acts as the classroom and the voice/text channels serve as the team tables in that virtual “room”. In fact, Discord seemed to realize this potential as well. They recently updated their own description to pitch Discord as a communication platform for non-gamers as well. Furthermore, they recently added video chat and screen sharing functionality, which are both functionalities geared towards non-gaming use cases for Discord. This is the most recent description on the Discord website:

“Discord is the easiest way to communicate over voice, video, and text, whether you’re part of a school club, a nightly gaming group, a worldwide art community, or just a handful of friends that want to hang out.”

The screenshot below should give a better idea of what the LimpergPython2020 Discord server looked like. The server provided the centralized location where the voice and text communications took place for the class. Each participant joined the server based on an invite link and you can see them being “online” in the server by looking at part C in the screenshot. The server included a collection of text and voice channels. Parts A and E show the team rooms that the participants joined to work on the problems together using voice chat, video chat, and/or screensharing. Discord also allows to create text channels (see parts B and D) that can be used to make announcements and share resources. The announcement channel was used as an alternative to email communication, various channels (such as “daily-todo-list”) contained information and resources to help the participants (see Part B for an example), and there was a variety of channels for participants to type out questions that they'd like me to answer in the live Q&A session. 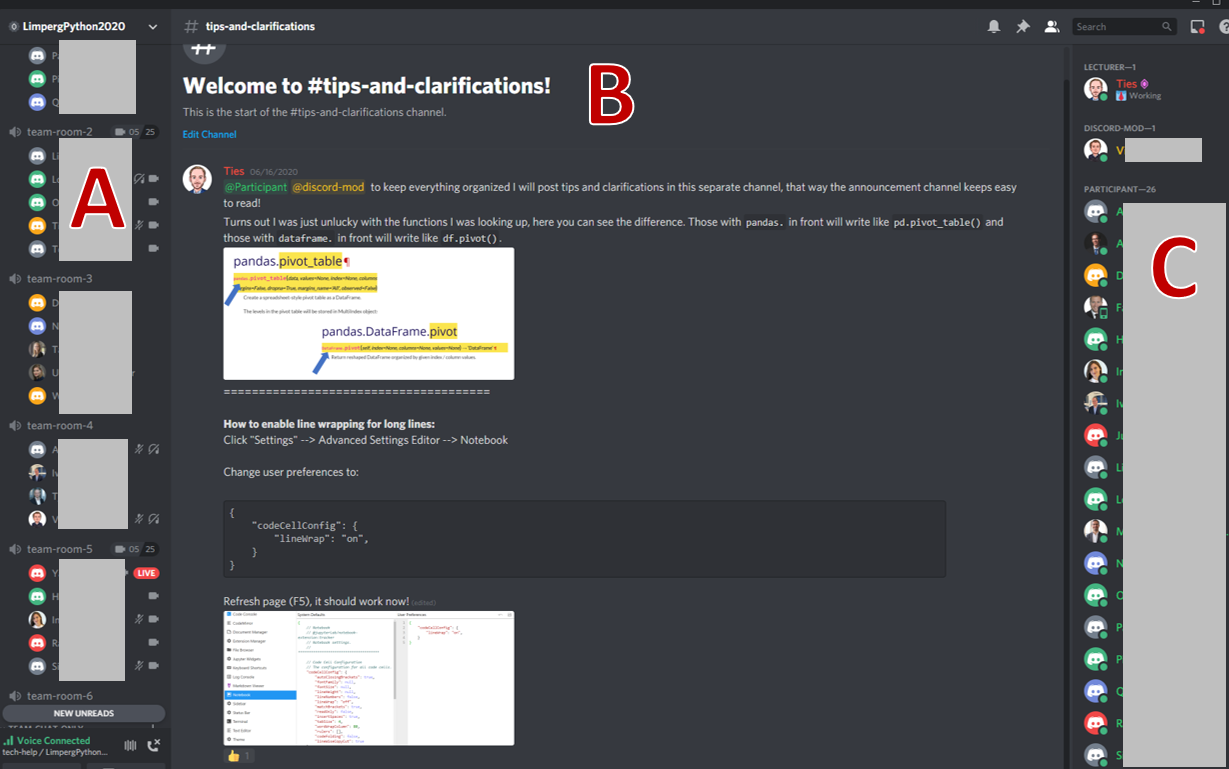 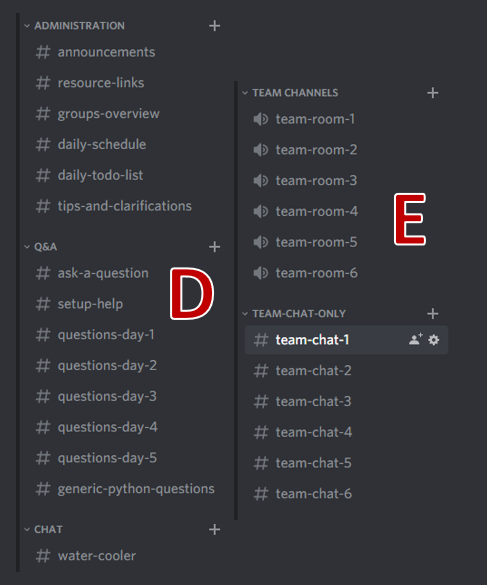 Pros and Cons of using Discord

In summary, using Discord as our virtual classroom was a very successful experience that helped build a “classroom feeling” and allowed everyone to work together collaborative much like a physical classroom. Nothing replaces being physically together but using Discord was a good second best. If you would like to check it out you can do so by going to https://discord.com/.