The main venue of the congress is the Undergraduate Center of Aalto University (Otakaari 1d, 02150 Espoo). The Undergraduate Centre, occupying the site of the main building of the former Helsinki University of Technology, is one of Otaniemi’s prime landmarks. The landscape-dominating stature of the new building is equal to that of its predecessor. In fact, with its surrounding terraced banquet courtyards, the building’s auditorium is reminiscent of ancient Greece. The building was restored by Aalto University in 2015.

Following his architecture competition win at the end of the 1940s, Alvar Aalto was commissioned to design the Otaniemi site as the Helsinki University of Technology prepared for its move from Hietalahti, Helsinki. Aalto chose to position several buildings in ways that complimented the site’s many hills, setting aside the lowland areas for grass fields and car parks.

In fact, there wasn’t much by way of forestry in the area at this time, with arable and pasture land previously dominating the site. Otaniemi has a rich history of manor houses dating back to the 16th century. Indeed, alongside many of the area’s more traditionally well-known features, the Hagalund manor courtyard, located behind the School of Chemical Engineering’s main building, often goes unnoticed. The site of the current Undergraduate Centre was previously occupied by the Otaniemi manor house, once owned by the von Wright family. 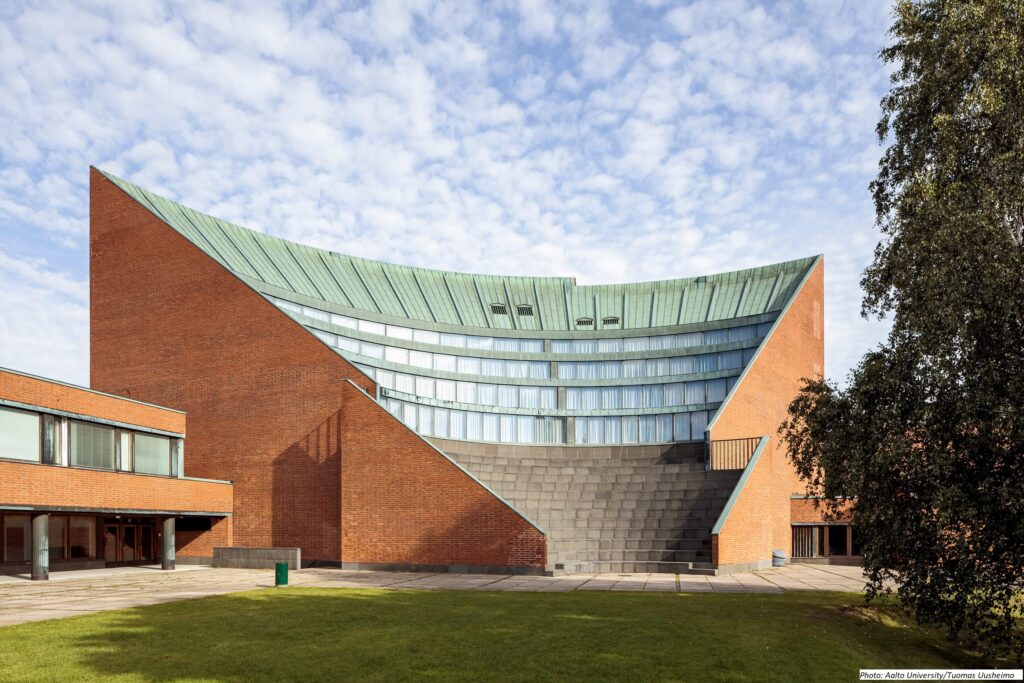 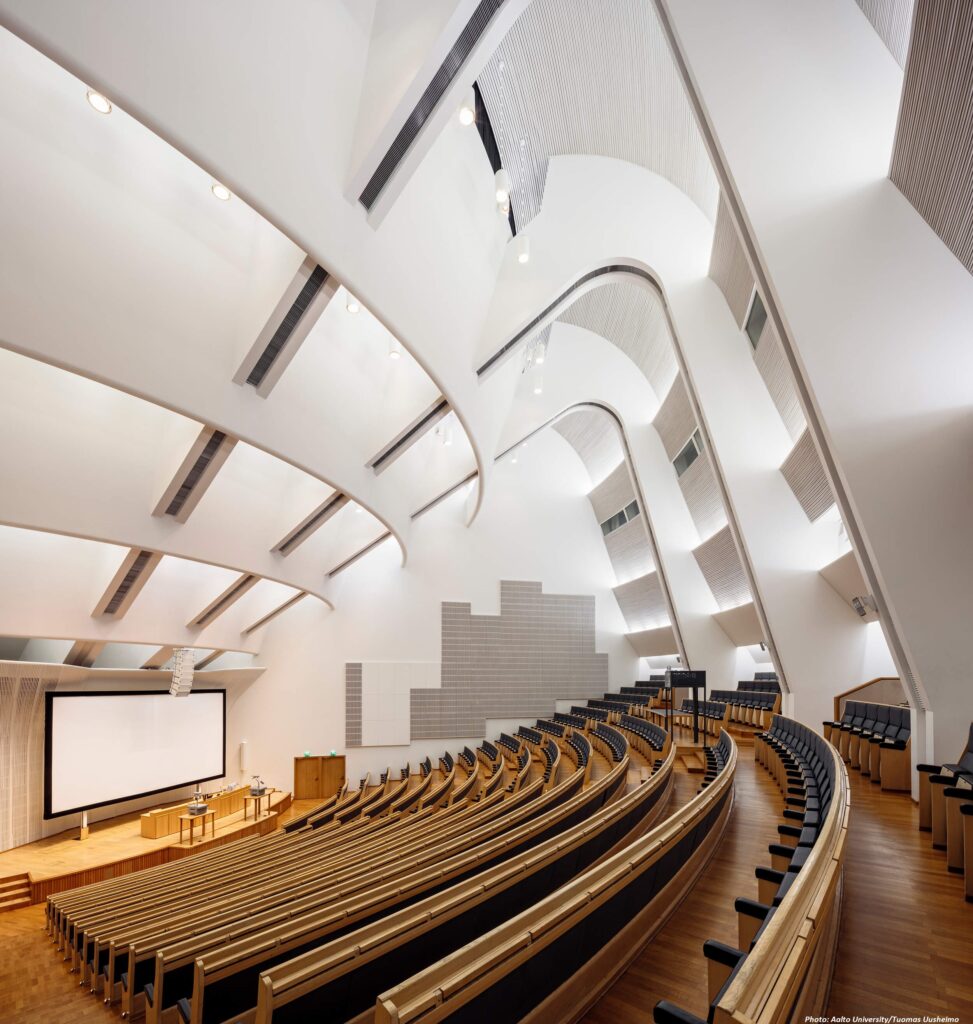 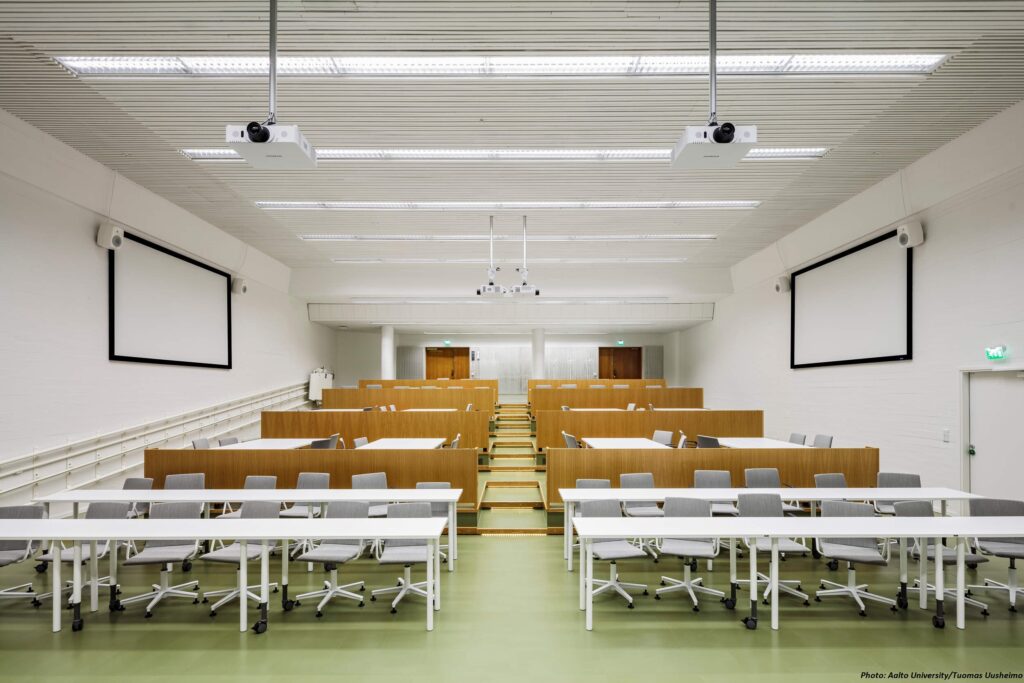 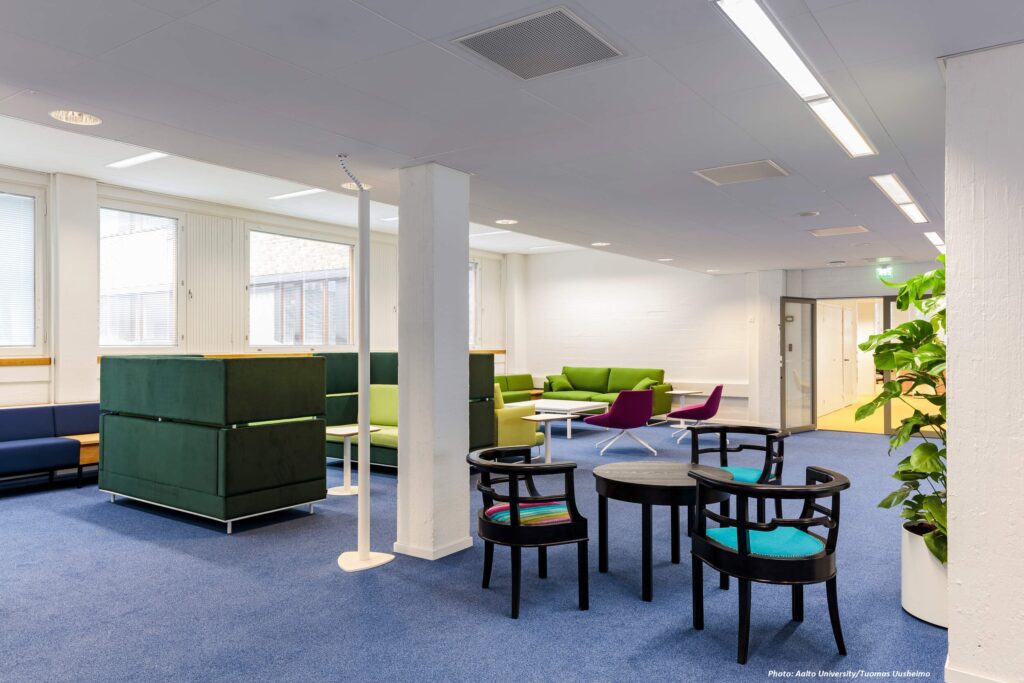 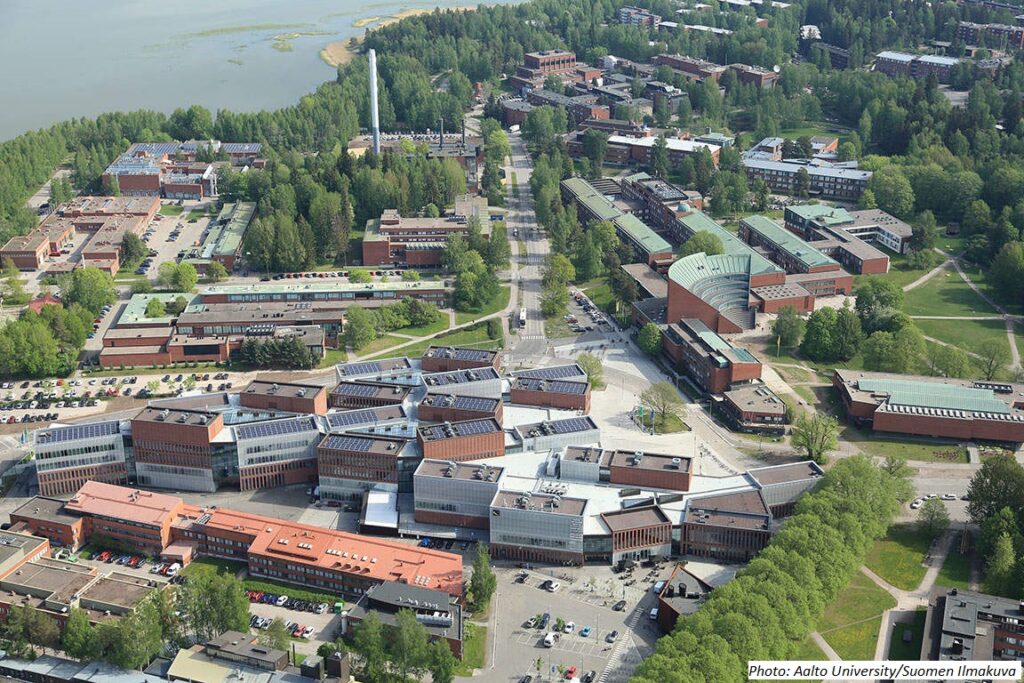 The opening session of the EAA 2023 Conference will take place in the Dipoli building (approximately 300 meters from the undergraduate center). Dipoli (Otakaari 24, 01250 Espoo) is the main building of Aalto University, and a popular meeting place. Dipoli was originally designed in 1966 by Raili and Reima Pietilä as the new university building for technology students. Dipoli was completed in 1966 and served as the student house of Helsinki University of Technology for a long time. After that, Dipoli served as a conference center for several decades. It was previously renovated in the 1980s. The second renovation of the 11000-square-meter building took two years and was completed in the summer of 2017.

Many of the facilities were restored to their original appearance, such as staircases that had been closed were reopened, roof windows that had been covered were uncovered, and unnecessary partition walls were taken down. The seven fireplaces in the building were renovated. The shiny granite floor installed in the 1980s was given a matt surface, which goes better with the interior. Some of the concrete walls that had been repainted were restored to their original appearance. The air-conditioning and heating systems were replaced: today, geothermal heat is used to cover around 50 percent of the heating requirements in the building.

Approximately one percent of the renovation costs was spent on the university’s art acquisitions in accordance with the art percentage principle. Dipoli’s art collection’s concept is Radical Nature. Known for its multifunctional spaces, the building continues to function as a meeting place. In addition to being used for the university’s own events, its facilities are also open to the public. Dipoli can host dinners for up to a thousand people or up to 30 separate events simultaneously. The bedrock and surrounding forest have inspired the sculptural copper and granite facade, which is a Finnish architectural gem. 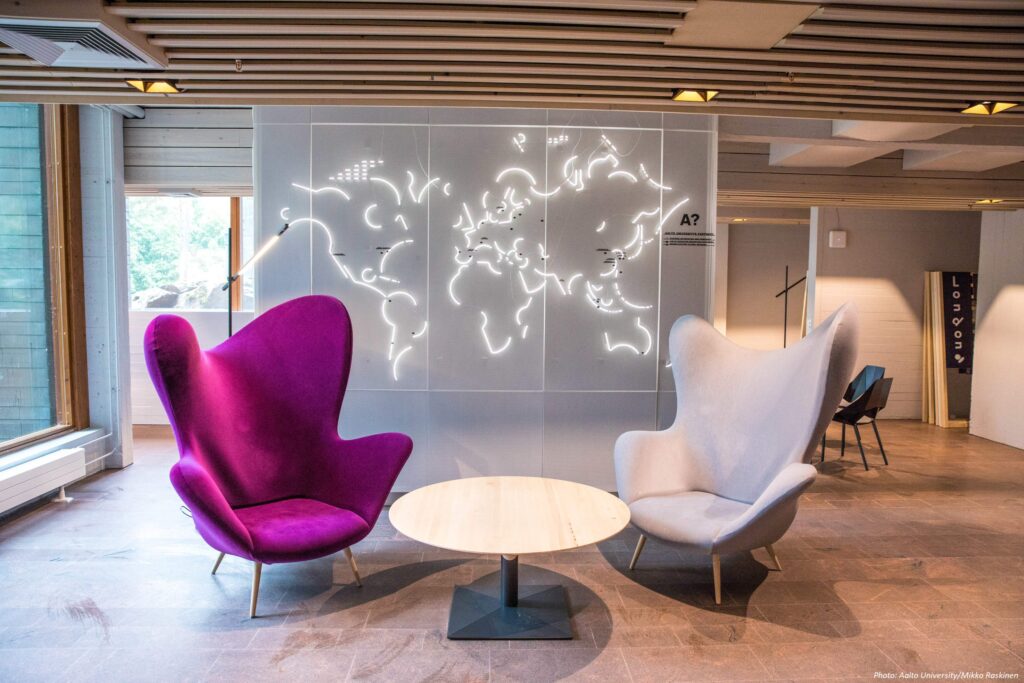 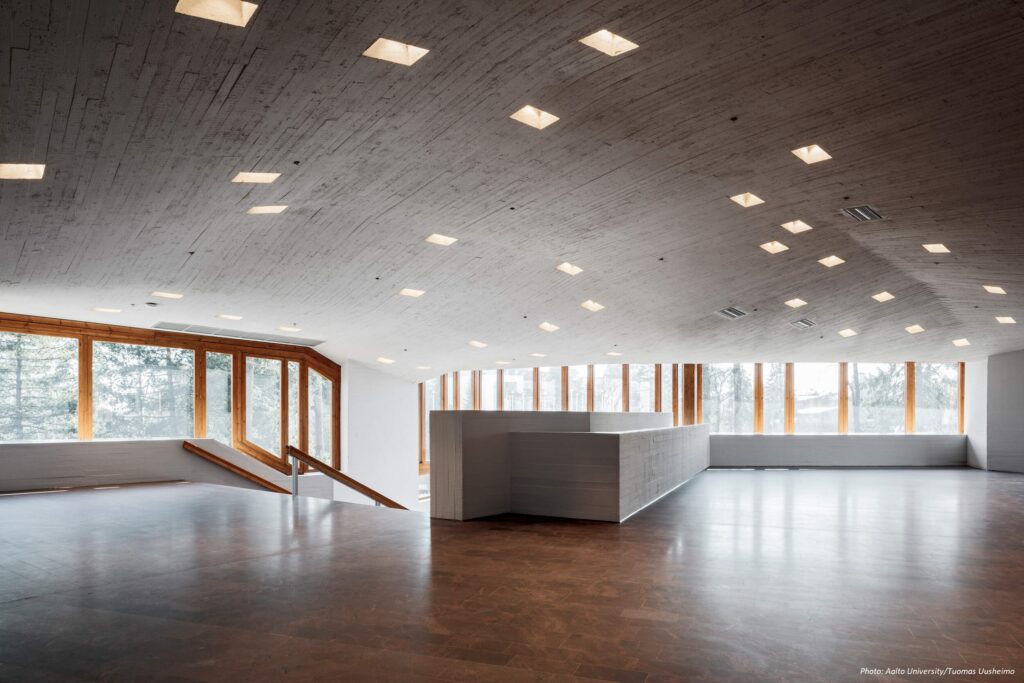 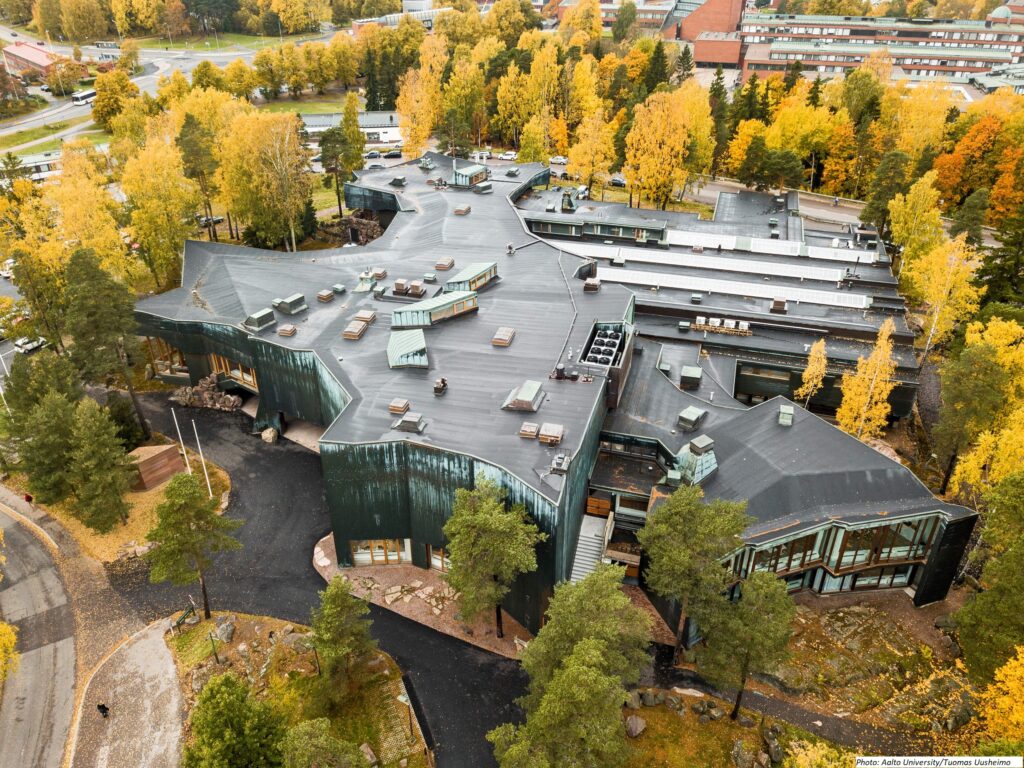 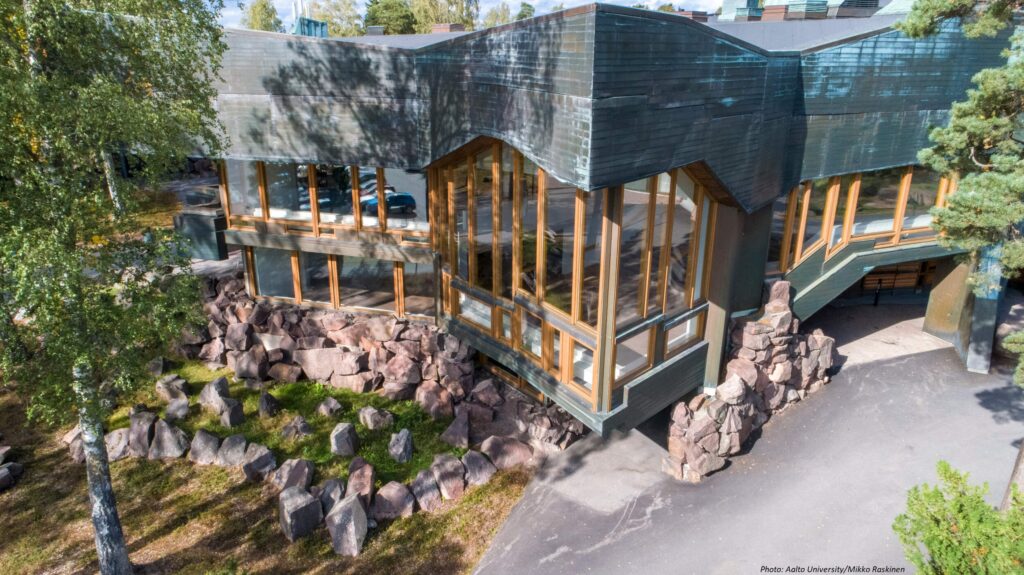 The conference venues can be easily reached by public transport, such as Metro and Buses. You can easily reach the conference venues from the central metro stations in Helsinki (Kaampi or Central Railway Station) – you can board the train towards Tapiola or Matinkylä and get down at the metro stop named Aalto-yliopisto (Aalto University). There are two exits from the Metro station, Otaniementie, and Tietotie. Via Otaniementie, you can easily reach the Main Building Dipoli and the Undergraduate Centre. The Metro runs every 2.5 minutes during the rush hour, and every 4–5 minutes at other times. The journey from Kamppi to Aalto University in Otaniemi takes 11 minutes.

Besides the Metro, there are some bus lines serving Otaniemi: 52, 111, 550, 510, and 555. All these buses stop by the Aalto University Metro station, entrance A (Otaniementie). Outside the Metro operating hours, bus 108N runs to Otaniemi. Tickets can be purchased online on HSL’s mobile app, or at the bus station’s ticket machine or sales points like R-kiosks. Read more about tickets and fares from HSL.fi. The same ticket is valid on buses and the metro. To reach Aalto University stops, you would need Zone “AB” tickets (priced at 2.80 Euros on the HSL app).